Why We Learn Roman Numerals 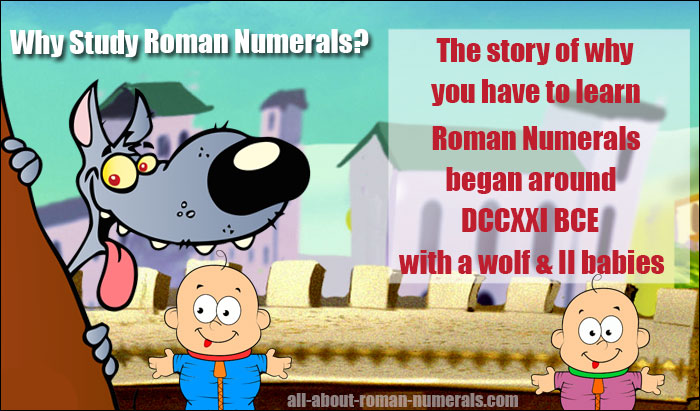 Q. Why Do We Have to Study Roman Numerals? A. We use them… occasionally.

Many great stories have fantastical beginning. Here is the mythical story of Rome’s founding.

The Roman God of War (Mars) had twin sons Romulus and Remus to the priestess Rhea Silvia. This upset the evil king of the day who had her imprisoned. The evil king then ordered a slave to kill the babies. The kind-hearted slave could not bring himself to do this so he set them adrift in a basket on the river Tiber. The children floated downstream until they were discovered by a ‘she wolf’ who had recently lost her cubs. The wolf rescued the boys and suckled (fed) them. Soon after this a good shepherd named Faustulus took the boys home and raised them as his own. 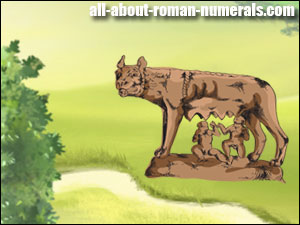 Romulus,  Remus & the She Wolf

The boys grew up and decided to start a whole new city. They had an ongoing fight about what to name the city and one day it all got too much so Romulus killed Remus. Romulus then named the city Rome after himself and crowned himself the city’s first king.

Over the next M years Rome started taking over countries all around it and eventually became one of the biggest Empires in the world. It stretch all over Europe and took in what is now Britain, Germany, France, Spain and the top of Africa to name but a few. As a result of this it spread its language, NUMBER SYSTEM and ways of doing things all over the known world.

In the 800s mathematicians in Arabic world and India began developing our modern number system. This new number system became known as the Hindu Arabic Number System. It wasn’t until the early 1200s when the Italian mathematician Leonardo Fibonacci c 1175-1250 started making this new system popular that Roman Numerals. Over the next 100 years Roman Numerals became used less and less but they still continued to be used for some purposes.

In a nutshell…we learn Roman Numerals because they are still used in a few places.

Take Me Back to  All About Roman Numerals