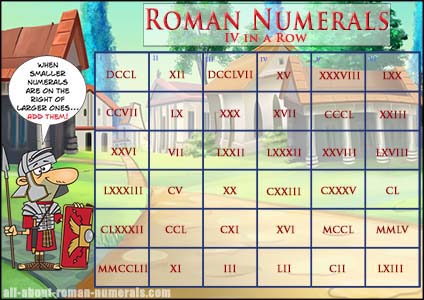 1. Roll the die.
2. Choose a square with the same number as the dice.
3. Read the Roman numeral, and if correct, place a colored counter on the square.
4. The winner is the player who achieves 4 counters in a row vertically, horizontally or diagonally.

– This game works best as a two player game.
– Can be played without a die – children just choose numeral.
– Try playing best of three plays – this helps to reinforce roman numerals.

Take me to the Roman Numerals Game

Take me Back to the Roman Numerals Homepage